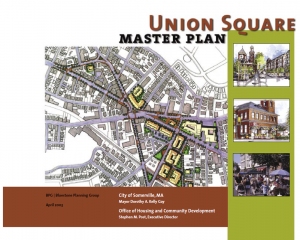 I’m happy to report that the Massachusetts Superior Court rendered a favorable decision based on a brief that I wrote in an eminent domain case. This eminent domain case involved the Somerville Redevelopment Authority’s takings of multiple parcels of real property in the Union Square area. The City of Somerville made the takings in connection with an expansion of the MBTA’s Green Line, as well as a redevelopment of the Union Square area.

The owners of the parcels, one of whom I represented, disputed the amount that the City of Somerville tendered when the City took the properties by eminent domain. The City of Somerville argued that based on the “project influence rule,” the value of the properties should be determined based on valuations in 2003, when the project to revitalize Union Square was first announced. The City sought to exclude any evidence of valuations of the property after 2003. That interpretation of the project influence rule would essentially freeze the property values at 2003 levels.

I, along with attorney John S. Leonard, drafted briefs opposing the City’s interpretation of the project influence rule. The court denied the City’s motion, and agreed with our interpretation of the project influence rule. The Court ruled that our client’s evidence regarding the value of the properties at the time of the taking was admissible, and could be considered along with the City’s evidence. That meant that our clients could argue that the properties taken by the City should be valued closer to their current values, not their 2003 values.

The full text of the court’s decision is available here.